Cheating to get ahead in driving tests is hardly a new phenomena unfortunately. We’ve already covered the increase in fraudsters taking theory tests for learners by pretending to be them or learners using a bluetooth ear bud to be fed the right answers while sitting their theory test.

Now you can add another con to the list: Buying a full driving licence via the web or social media so you don’t have to take the practical driving test.

The pitch is simple: Scammers advertise online that they have access to people who work at the Driving and Vehicle Licensing Agency (DVLA) and other official agencies, and on receipt of your full name, passport photo and provisional licence number, can provide you with a bona fide driving licence in 5-7 days.

Of course, it’s all garbage with learners not issued with anything resembling a legit driving licence card and are left out of pocket, too afraid to go to the police because, well, they were trying to break the law themselves.

The DVLA confirmed to the BBC who recently investigated the issue that, “we have so far found no evidence to suggest these claims are … anything more than money-making scams.”

One hapless learner featured in the report is ‘Scarlett’ who handed over £500 to one such service advertising on Instagram. For her troubles, Scarlett was sent an image of her brand new ‘driving licence’, not an actual card:

“I checked the [licence] details he sent me but it was all fake. I never received no licence just that picture. If you’ve found him, can you get my money back? I want my money back.”

• ‘Scarlett’ in an interview with the BBC.

It only takes a quick web search to uncover multiple fraudulent sites purporting to be legit such as drivinglicenceforsale that sells licences for anything from cars to buses, and has every official under the sun working for them. Allegedly. 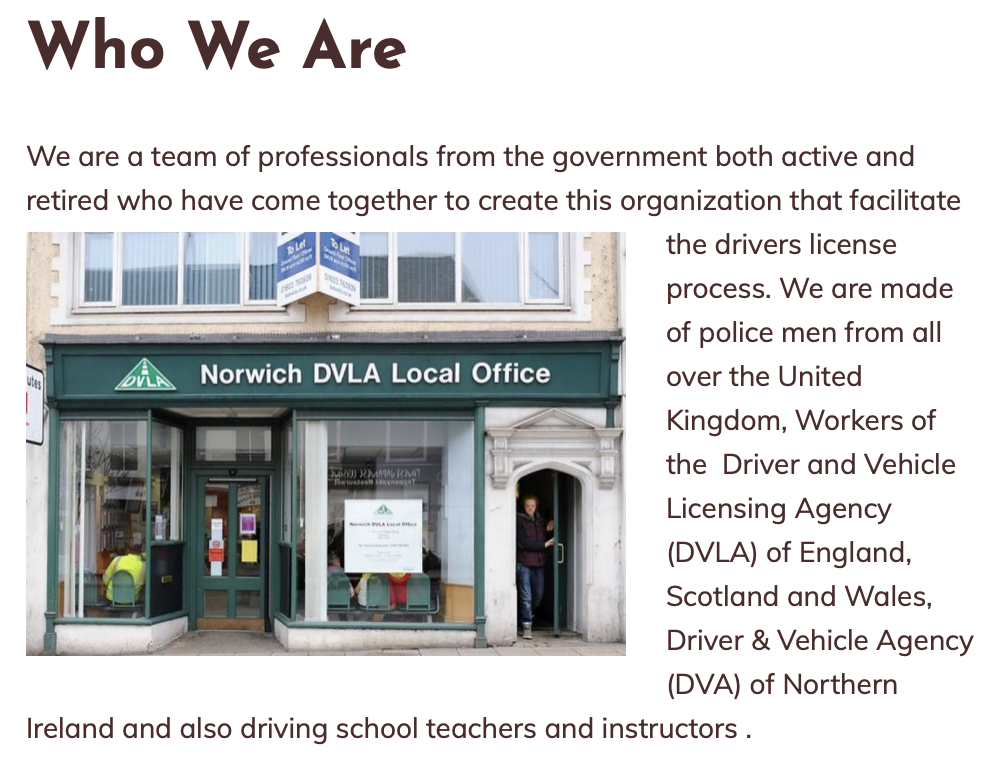 • Drivinglicenceforsale’s pitch to the buying public; obviously Norwich’s DVLA local office has nothing to do with the scam.

Out in the open

Other are less guarded about their services and feature company titles such as myfakeid and counterfeitnote, the latter even offering a seven-day satisfaction guarantee or your money back.

Hmm, we wouldn’t count on it.

As for having the con artists closed down, the DVLA says that it is aware of “these offers and are investigating similar claims”.

In the meantime, business must be brisk with one driving instructor based in Bradford saying that scammers are openly advertising fake driving licences for sale on posters in the city.

Such online ‘services’ may be becoming more predominant because of the pandemic that is making securing a driving test slot a nightmare for many learners.

Or it’s more simple than that – there are wannabe drivers out there who simply don’t want to go through the hassle or stress of having to qualify to drive.

If a pupil should be tempted to cheat and break the law, they’d do well to remember that the driving test is there to ensure they are a safe and confident enough to be allowed out unaccompanied on UK roads.

And if that isn’t enough of a motivation, then being caught without a valid licence – say, with a screenshot of that new licence that features fake info – will see the offender fined up to £1,000 with up to six points added to their licence.

The police will also likely to have questions about how the fake licence was obtained in the first place.

In other words, not the best start to a lifetime of driving.

Give yourself the best possible chance of passing your theory test with Theory Test Pro. Sign up for free here.