Big changes to the driving test touch down in December – but some instructors are not happy with the new manoeuvres while many drivers believe the new test doesn’t go far enough.

When the new test was confirmed in April, the change that dominated headlines was the introduction of sat navs. The move was met with thumbs up across the board but on closer inspection of all the changes to the practical test, one is now causing serious concern among instructors.

While the ‘reversing round a corner’ and ‘performing a three-point turn’ manoeuvres have both been retired (because they apparently don’t reflect modern driving), one of the replacement manoeuvres has raised the heckles of ADIs: “Pulling up on the right-hand side of the road and reversing two car lengths”.

In a nutshell, learners taking the test will be expected to cross over to the other side of the road into the path of oncoming traffic before reversing for the required distance. From there, they will then invariably need to pull out safely, again into the flow of oncoming traffic.

Its inclusion has infuriated instructors so much that one, Anthony Cove, has even started an online petition to have the manoeuvre removed. On the petition, Anthony states: “This is an unnecessary and dangerous exercise which also goes against the Highway Code (rule 239). Another proposed new part of the test is driving into a parking space and reversing out. Again I was always told to reverse in then drive out as it’s easier to look for pedestrians.”

Other instructors have also spoken out with ADI Ann Moyes writing that “I’ve always disagreed with these two particular introductions to the new test. But they don’t listen to the folks who are out there trying to actually teach people why they now have to contravene the Highway code to pass their test. All my students when I explain think it’s stupid and dangerous.”

And the very people charged with conducting the new test don’t appear to be happy either as retired examiner William Young explains: “It is bad enough at times getting a candidate to move off after a normal stop, never mind moving off on the wrong side of the road. Another example of people in the Ivory Tower making decisions that affect the lives of others… Why don’t they consult examiners before they make these ludicrous decisions.” 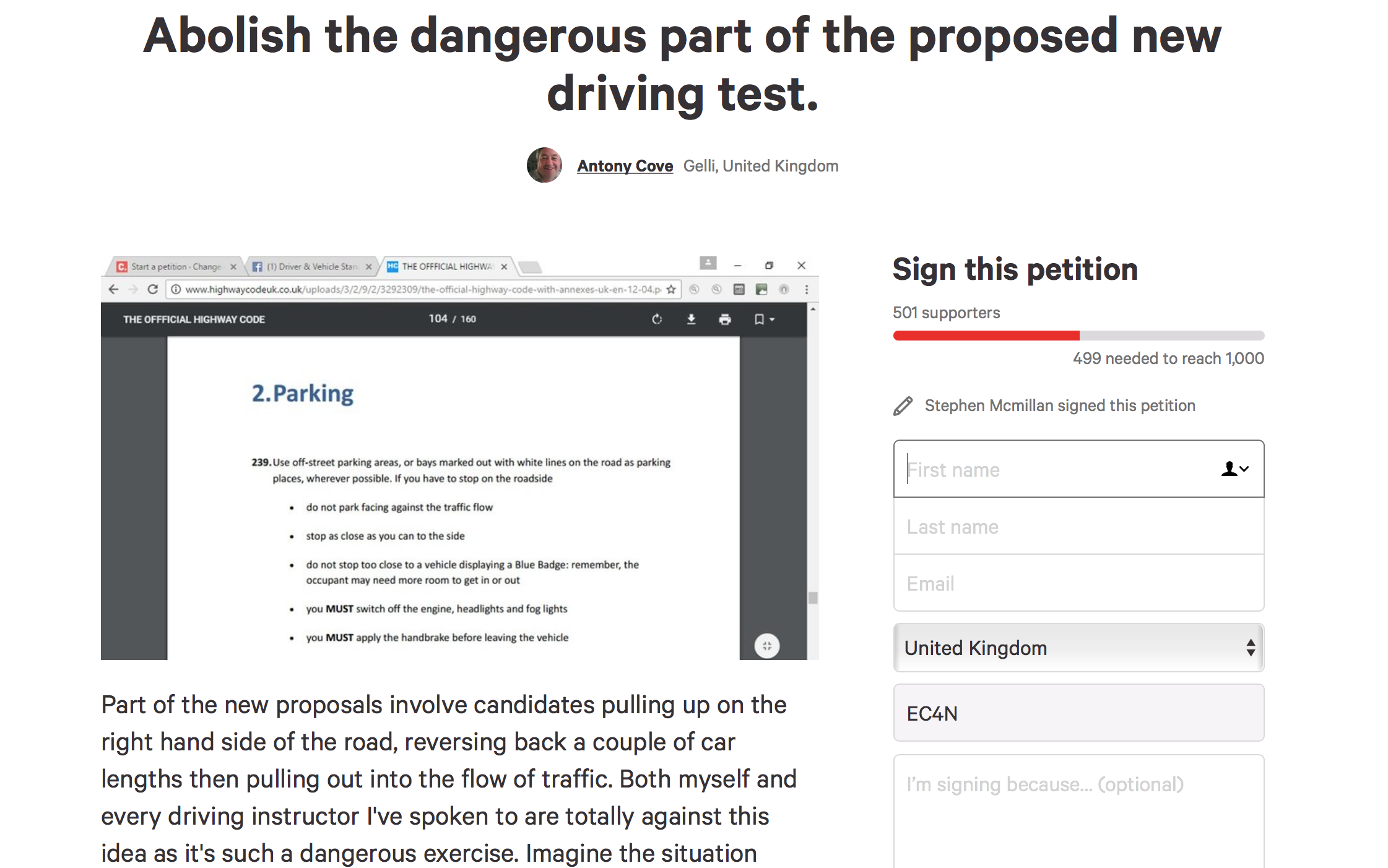 Set up by instructor Anthony Cove, the Change.org petition is demanding the removal of what some ADIs believe are two dangerous manoeuvres that are to be used in the new driving test.

According to a recent survey conducted by Confused.com, motorists aren’t enamoured of the manoeuvre either with 43% questioning the wisdom of asking drivers to pull over into incoming traffic. But their concerns don’t end there with 33% believing that the new test won’t reduce the number of people being killed or seriously injured on our roads.

Ultimately, motorists believe that the new test doesn’t go far enough with 66% stating that night driving should feature and 73% saying motorway driving must be included. But the biggest demand from motorists is for ‘driving etiquette’ to be taught in lessons including the risks of middle-lane hogging, tailgating, phone use and other bad habits that are rampant on UK roads.

Confused.com’s motoring editor, Amanda Stretton, says: “To help improve the quality of driving on our roads, there is a valid argument that new drivers should be taught general road etiquette and how to treat fellow drivers. This could help to minimise stress levels, road rage, and the risk of accidents, providing all drivers an easy ride.”

Here are the full results of Confused.com’s survey into what motorists want to see introduced to the new practical driving test: